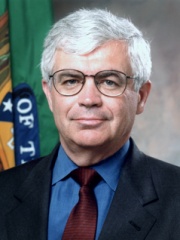 John Brian Taylor (born December 8, 1946) is the Mary and Robert Raymond Professor of Economics at Stanford University, and the George P. Shultz Senior Fellow in Economics at Stanford University's Hoover Institution.He taught at Columbia University from 1973 to 1980 and the Woodrow Wilson School and Economics Department of Princeton University from 1980 to 1984 before returning to Stanford. He has received several teaching prizes and teaches Stanford's introductory economics course as well as PhD courses in monetary economics.In research published in 1979 and 1980 he developed a model of price and wage setting—called the staggered contract model—which served as an underpinning of a new class of empirical models with rational expectations and sticky prices—sometimes called new Keynesian models. In a 1993 paper he proposed the Taylor rule, intended as a recommendation about how nominal interest rates should be determined, which then became a rough summary of how central banks actually do set them. He has been active in public policy, serving as the Under Secretary of the Treasury for International Affairs during the first term of the George W. Read more on Wikipedia

Page views of John B. Taylors by language

Among economists, John B. Taylor ranks 329 out of 315. Before him are Tatyana Golikova, Edith Abbott, Thomas Hodgskin, Andreas Kaplan, Sri Mulyani, and Martin Feldstein. After him are Bjørn Lomborg, Euclid Tsakalotos, Ludwig Lachmann, Clara Ponsatí, Muriel Casals i Couturier, and Richard Florida.