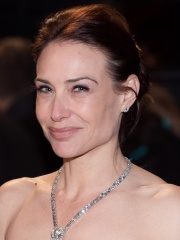 Claire Antonia Forlani (born 17 December 1971) is an English actress. She became known in the mid-1990s for her leading role in the film Mallrats, and in the Jean-Michel Basquiat 1996 biopic, Basquiat. In 1998, she achieved wide recognition for starring in the fantasy romance film Meet Joe Black (1998). Read more on Wikipedia

Among people born in 1971, Claire Forlani ranks 35. Before her are Fabien Barthez, Queen Máxima of the Netherlands, Hakan Şükür, Denise Richards, Jeff Kinney, and Jacques Villeneuve. After her are Thalía, Selena, Paul Bettany, Martin Freeman, Sofia Coppola, and Elif Shafak.