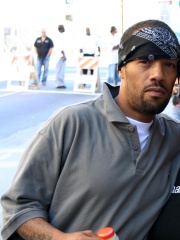 Reginald "Reggie" Noble (born April 17, 1970), better known by his stage name Redman, is an American rapper, DJ, record producer, and actor. He rose to fame in the early 1990s as an artist on the Def Jam label. He is well known for his collaborations with his close friend Method Man, as one-half of the rap duo Method Man & Redman, including their starring roles in films and sitcoms. Read more on Wikipedia

Page views of Redmen by language

Among singers, Redman ranks 2,109 out of 3,541. Before him are Ida Corr, Younha, Paolo Nutini, Idan Raichel, Kayah, and Paula Cole. After him are Jerry Nelson, Gentleman, Aaron Carter, Pierre Bouvier, Natasja Saad, and Willow Smith.