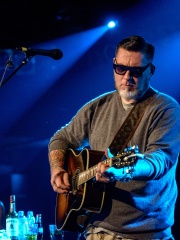 Erik Francis Schrody (born August 18, 1969), known by his stage name Everlast, is an American musician, singer, rapper, and songwriter, who was the frontman for hip hop group House of Pain. He was also part of the hip hop supergroup La Coka Nostra, which consists of members of House of Pain and other rappers. Read more on Wikipedia

Page views of Everlasts by language

Among singers, Everlast ranks 2,247 out of 3,528. Before him are Sonya Yoncheva, Fedez, Gülşen, Fabrizio Moro, Lars-Göran Petrov, and Tasmin Archer. After him are M. Pokora, Michael Wong, Redman, Amir Haddad, Tommy Nilsson, and Natalia Lafourcade.