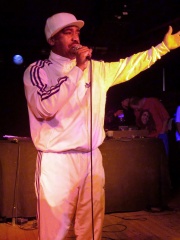 Kurtis Walker (born August 9, 1959), professionally known by his stage name Kurtis Blow, is an American rapper, singer, songwriter, record/film producer, b-boy, DJ, public speaker and minister. He is the first commercially successful rapper and the first to sign with a major record label. "The Breaks", a single from his 1980 self-titled debut album, is the first certified gold record rap song. Read more on Wikipedia

Since 2007, the English Wikipedia page of Kurtis Blow has received more than 983,319 page views. His biography is available in 17 different languages on Wikipedia making him the 1,703rd most popular singer.