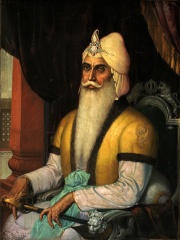 Maharaja Ranjit Singh (13 November 1780 – 27 June 1839), popularly known as Sher-e-Punjab or "Lion of Punjab", was the leader of the Sikh Empire, which ruled the northwest Indian subcontinent in the early half of the 19th century. He survived smallpox in infancy but lost sight in his left eye. He fought his first battle alongside his father at age 10. Read more on Wikipedia

Since 2007, the English Wikipedia page of Ranjit Singh has received more than 2,788,611 page views. His biography is available in 42 different languages on Wikipedia making him the 5,199th most popular politician.

Among politicians, Ranjit Singh ranks 5,166 out of 14,801. Before him are Kim Yong-il, King Ping of Zhou, Puabi, Maharbal, Emperor Jingzong of Western Xia, and Sarduri I. After him are Jaunutis, Prince Ferdinand of Saxe-Coburg and Gotha, Emperor Junna, Hamani Diori, Baruch ben Neriah, and Liuva I.