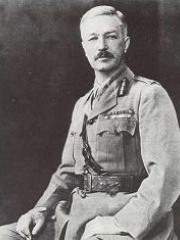 Colonel Reginald Edward Harry Dyer, CB (9 October 1864 – 23 July 1927) was an officer of the Bengal Army and later the newly constituted Indian Army. His military career began serving briefly in the regular British Army before transferring to serve with the Presidency armies of India. As a temporary brigadier-general he was responsible for the Jallianwala Bagh massacre in Amritsar (in the province of Punjab). Read more on Wikipedia

Since 2007, the English Wikipedia page of Reginald Dyer has received more than 894,161 page views. His biography is available in 18 different languages on Wikipedia making him the 1,152nd most popular military personnel.

Among people born in 1864, Reginald Dyer ranks 115. Before him are George Hillyard, William S. Hart, Arthur Smith Woodward, Frank Chapman, Antonín Sova, and Alice Davenport. After him are Banjo Paterson and Jessie Ralph. Among people deceased in 1927, Reginald Dyer ranks 95. Before him are J. B. Bury, Charles Warren, Adolphus Cambridge, 1st Marquess of Cambridge, Samuel Garman, Ricardo Güiraldes, and Henry Petty-Fitzmaurice, 5th Marquess of Lansdowne. After him are Feliciano Viera, Leonard Wood, and Sybil Bauer.

Among MILITARY PERSONNELS In Pakistan

Among military personnels born in Pakistan, Reginald Dyer ranks 2. Before him are Nearchus (-356). After him are Ashfaq Parvez Kayani (1952).