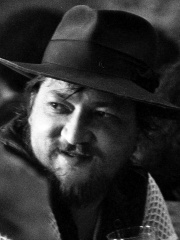 Rainer Werner Fassbinder (German: [ˈʁaɪ̯nɐ ˈvɛʁnɐ ˈfasbɪndɐ] (listen); 31 May 1945 – 10 June 1982), sometimes credited as R. W. Fassbinder, was a German filmmaker, actor, playwright, theatre director, composer, editor, and essayist. He is widely regarded as a prominent figure and catalyst of the New German Cinema movement. His first feature-length film was a gangster movie called Love Is Colder Than Death (1969); he scored his first domestic commercial success with The Merchant of Four Seasons (1972) and his first international success with Ali: Fear Eats the Soul (1974), both of which are considered masterpieces by contemporary critics. Read more on Wikipedia

Rainer Werner Fassbinder is most famous for his work in the German New Wave film movement. He produced and directed over 40 films in his lifetime.