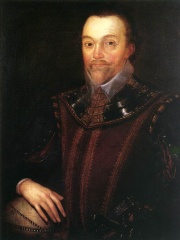 Sir Francis Drake (c.  1540 – 28 January 1596) was an English explorer, sea captain, privateer, slave trader, naval officer, and politician. Drake is best known for his circumnavigation of the world in a single expedition, from 1577 to 1580. This included his incursion into the Pacific Ocean, until then an area of exclusive Spanish interest, and his claim to New Albion for England, an area in what is now the American state of California. Read more on Wikipedia

Francis Drake was an English explorer and privateer, who was the first Englishman to circumnavigate the world. He is most famous for his raids on Spanish ships and settlements in the Americas.

Among explorers, Francis Drake ranks 12 out of 405. Before him are Bartolomeu Dias, Hernán Cortés, James Cook, Roald Amundsen, Ibn Battuta, and Zheng He. After him are Francisco Pizarro, Prince Henry the Navigator, Jacques Cartier, Fridtjof Nansen, Erik the Red, and David Livingstone.