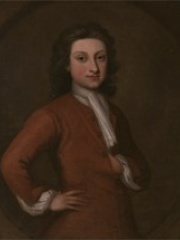 Philip Carteret, Seigneur of Trinity (22 January 1733, Trinity Manor, Jersey – 21 July 1796, Southampton) was a British naval officer and explorer who participated in two of the Royal Navy's circumnavigation expeditions in 1764–66 and 1766–69. Read more on Wikipedia

Since 2007, the English Wikipedia page of Philip Carteret has received more than 39,766 page views. His biography is available in 15 different languages on Wikipedia making him the 284th most popular explorer.

Among people born in 1733, Philip Carteret ranks 12. Before him are Hubert Robert, Siraj ud-Daulah, Charles of Saxony, Duke of Courland, Daniel Solander, Richard Kirwan, and Christoph Friedrich Nicolai. After him are Johan Zoffany and George Read. Among people deceased in 1796, Philip Carteret ranks 20. Before him are Alexandre-Théophile Vandermonde, Guillaume Thomas François Raynal, Jean-Marie Collot d'Herbois, Prince Louis Charles of Prussia, François Séverin Marceau, and Juan José Elhuyar. After him is William Chambers.

Among EXPLORERS In Jersey