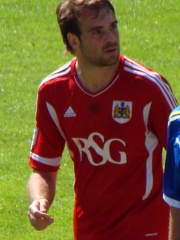 Brett Douglas Pitman (born 31 January 1988) is a Jersian professional footballer who currently plays as a forward for EFL League Two club Bristol Rovers. He has spent most of his career at AFC Bournemouth in two separate spells, totalling 102 goals in 301 games. After starting his career on his native island, he moved to Bournemouth as a 16-year-old and went on to become a regular in their first team, helping them avoid relegation from The Football League in 2009 and earn promotion a year later. Read more on Wikipedia

Among SOCCER PLAYERS In Jersey

Among soccer players born in Jersey, Brett Pitman ranks 2. Before him are Graeme Le Saux (1968).