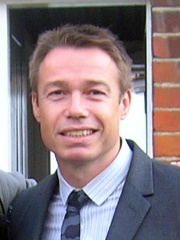 Graeme Pierre Le Saux ( lə SOH; born 17 October 1968) is an English football pundit and retired footballer. He played from 1989 to 2005 starting as a left winger during his first spell at Chelsea, later transitioning to the role of a left back at Chelsea, Blackburn Rovers and Southampton, and for the England national football team. After beginning playing in Jersey, he moved to England and signed for Chelsea, debuting in 1989. Read more on Wikipedia

Since 2007, the English Wikipedia page of Graeme Le Saux has received more than 835,396 page views. His biography is available in 24 different languages on Wikipedia making him the 6,111th most popular soccer player.

Among SOCCER PLAYERS In Jersey