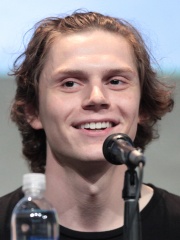 Evan Peters (born January 20, 1987) is an American actor, best known for his multiple roles on the FX anthology series American Horror Story, Stan Bowes in the first season of the FX drama Pose, and his role as the mutant Quicksilver in the superhero films X-Men: Days of Future Past (2014), X-Men: Apocalypse (2016), and Dark Phoenix (2019). He made his acting debut in the 2004 drama film Clipping Adam and starred in the ABC science fiction series Invasion from 2005 to 2006. From 2004 to 2010, Peters appeared in numerous national commercials for established brands such as Kelloggs, Papa John's Pizza and PlayStation. Read more on Wikipedia

Since 2007, the English Wikipedia page of Evan Peters has received more than 13,496,352 page views. His biography is available in 41 different languages on Wikipedia making him the 3,425th most popular actor.