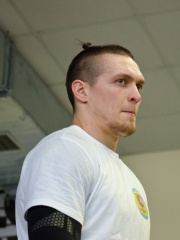 Oleksandr Oleksandrovych Usyk (; OO-sik; Ukrainian: Олекса́ндр Олекса́ндрович У́сик; born 17 January 1987) is a Ukrainian professional boxer. He is a world champion in two weight classes, having held the unified WBA (Super), IBF, WBO and IBO heavyweight titles since defeating Anthony Joshua in 2021; and the undisputed cruiserweight title from 2018 to 2019, being the first cruiserweight champion to hold all four major world titles. He is widely regarded as one of the greatest Ukrainian boxers of all time. Read more on Wikipedia