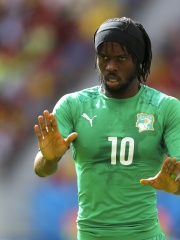 Gervais Yao Kouassi (born 27 May 1987), better known as Gervinho, is an Ivorian footballer who plays as a forward for Italian club Parma and the Ivory Coast national team. Gervinho began his career at ASEC Abidjan and Toumodi, before moving to Belgium in 2004 to play for Beveren. Between 2007 and 2011, he played in the French Ligue 1, initially at Le Mans and then at Lille. Read more on Wikipedia

Since 2007, the English Wikipedia page of Gervinho has received more than 1,436,412 page views. His biography is available in 48 different languages on Wikipedia making him the 1,600th most popular soccer player.

Page views of Gervinhos by language