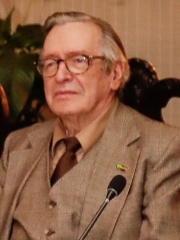 Olavo Luiz Pimentel de Carvalho (29 April 1947 – 24 January 2022) was a Brazilian polemicist, self-proclaimed philosopher, political pundit, former astrologer, journalist, and far-right conspiracy theorist. From 2005 until his death, he lived near Richmond, Virginia, in the United States.While publishing about politics, literature and philosophy since the 1980s, he made himself known to wider Brazilian audiences from the 1990s onwards, mainly writing columns for some of Brazil's major media outlets, such as the newspaper O Globo. In the 2000s, he began to use personal blogs and social media to convey his conservative and anti-communist ideas. Read more on Wikipedia

Among PHILOSOPHERS In Brazil

Among philosophers born in Brazil, Olavo de Carvalho ranks 2. Before him are Paulo Freire (1921). After him are Cláudio Hummes (1934) and Vicente Ferreira da Silva (1916).