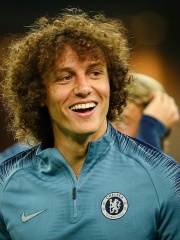 David Luiz Moreira Marinho (born 22 April 1987) is a Brazilian professional footballer who plays for Premier League club Arsenal and the Brazil national team. Primarily a centre back, he can also be deployed as a defensive midfielder.After starting out at Vitória, he moved to Benfica, remaining with the club for five seasons (three complete). He joined Chelsea in January 2011, winning the UEFA Champions League during the 2011–12 season. Read more on Wikipedia

Since 2007, the English Wikipedia page of David Luiz has received more than 4,002,161 page views. His biography is available in 62 different languages on Wikipedia making him the 773rd most popular soccer player.