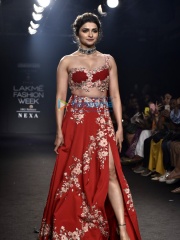 Prachi Desai is an Indian film actress and former television actress. She started her television career as lead protagonist in the successful TV drama Kasamh Se on Zee TV. She made her Bollywood debut in the 2008 film Rock On!!. Her other notable features include Life Partner (2009), Once Upon a Time in Mumbaai (2010), Bol Bachchan (2012) and I, Me Aur Main (2013). Read more on Wikipedia

Since 2007, the English Wikipedia page of Prachi Desai has received more than 2,099,308 page views. Her biography is available in 21 different languages on Wikipedia making her the 8,771st most popular actor.