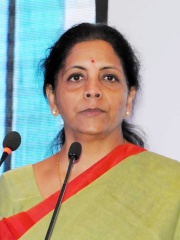 Nirmala Sitharaman (born 18 August 1959) is an Indian politician serving as the current Minister of Finance and Corporate Affairs of India. She is a member of the Rajya Sabha, upper house of the Indian Parliament, since 2014. Sitharaman formerly served as the Defence Minister of India, thereby becoming India's second female defence minister and also the second female finance minister after Indira Gandhi, and first full-time female Finance Minister. Read more on Wikipedia

Since 2007, the English Wikipedia page of Nirmala Sitharaman has received more than 6,049,604 page views. Her biography is available in 19 different languages on Wikipedia making her the 13,512th most popular politician.