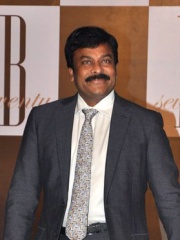 Chiranjeevi (born 22 August 1955 as Konidela Siva Sankara Vara Prasad), is an Indian film actor and politician. He served as the Minister of State with independent charge for the Ministry of Tourism, Government of India from 27 October 2012 to 15 May 2014. Prior to politics, Chiranjeevi had attended the Madras Film Institute and had worked primarily in Telugu cinema in addition to Tamil, Kannada, and Hindi films. Read more on Wikipedia

Since 2007, the English Wikipedia page of Chiranjeevi has received more than 6,895,789 page views. His biography is available in 19 different languages on Wikipedia making him the 5,769th most popular actor.

Page views of Chiranjeevis by language