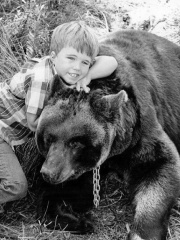 Clinton Engle Howard (born April 20, 1959) is an American actor. He is the second son born to American actors Rance and Jean Howard, and younger brother of actor and director Ron Howard. Clint has over 200 acting credits, appearing in feature films including The Waterboy and Apollo 13, as well as playing characters on television such as Mark Wedloe on Gentle Ben, Stanley on The Baileys of Balboa (1964–1965), Steve on The Cowboys (1974), and as Creepy Rodney on My Name Is Earl (2006–2008). Read more on Wikipedia

Among actors, Clint Howard ranks 6,106 out of 10,030. Before him are Harisu, Yuichi Nakamura, Gabriel Porras, RJ Mitte, Warren William, and Natassia Malthe. After him are Ann B. Davis, Roger Bart, Ben Hardy, Christopher Connelly, Kana Hanazawa, and Valerie Mahaffey.