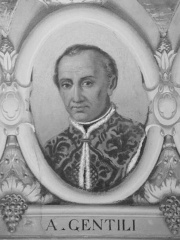 Alberico Gentili (January 14, 1552 – June 19, 1608) was an Italian-English jurist, a tutor of Queen Elizabeth I, and a standing advocate to the Spanish Embassy in London, who served as the Regius professor of civil law at the University of Oxford for 21 years. He is heralded as the founder of the science of international law alongside Francisco de Vitoria and Hugo Grotius, and thus known as the "Father of international law". Gentili has been the earliest writer on public international law. Read more on Wikipedia

Among noblemen, Alberico Gentili ranks 704 out of 843. Before him are Princess Anna Sophie of Schwarzburg-Rudolstadt, Princess Charlotte of Hesse-Darmstadt, Ali-Reza Pahlavi, Infanta Ana de Jesus Maria of Braganza, Princess Adelheid of Schaumburg-Lippe, and Filippo Paulucci. After him are Prince Ferdinand of Bavaria, Duchess Marie of Württemberg, Princess Adelheid of Anhalt-Bernburg-Schaumburg-Hoym, William IV, Count of Toulouse, Henry I, Margrave of Brandenburg-Stendal, and Günther Victor, Prince of Schwarzburg.

Among people born in 1552, Alberico Gentili ranks 18. Before him are Petrus Plancius, Agrippa d'Aubigné, Dom Justo Takayama, Pietro Cataldi, Edward Coke, and Anna of Cleves. After him are Richard Hakluyt and Gabriello Chiabrera. Among people deceased in 1608, Alberico Gentili ranks 13. Before him are Sigismund Rákóczi, Frederick I, Duke of Württemberg, Andrew Avellino, Bernardo Buontalenti, Ğazı II Giray, and Marie Eleonore of Cleves. After him is Philipp Nicolai.