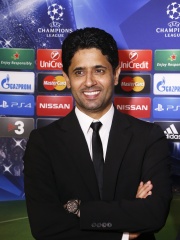 Nasser bin Ghanim Al-Khelaifi (Arabic: ناصر بن غانم الخليفي‎; born 12 November 1973) is a Qatari businessman and is the chairman of beIN Media Group, chairman of Qatar Sports Investments, president of Paris Saint-Germain (PSG), and Qatar Tennis Federation (QTF) and vice president of the Asian Tennis Federation for West Asia (ATF).Al-Khelaifi is the president and chief executive officer of Paris Saint-Germain in France. He is also a member of the organizing committee for the FIFA Club World Cup.In 2016, L'Équipe named him "the most powerful man in French football" and in 2020, he was named the most influential person in football by France Football. Read more on Wikipedia

Others born in Qatar

Among TENNIS PLAYERS In Qatar