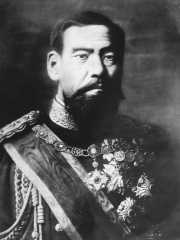 Emperor Meiji (明治天皇, Meiji-tennō, 3 November 1852 – 30 July 1912), also called Meiji the Great (明治大帝, Meiji-taitei) or Meiji the Good, (明治聖帝, Meiji-seitei) was the 122nd emperor of Japan according to the traditional order of succession. Reigning from 3 February 1867 until his death on 30 July 1912, and the first monarch of the Empire of Japan, he presided over the Meiji era, and was the figurehead of the Meiji Restoration, a series of rapid changes that witnessed Japan's transformation from an isolationist, feudal state to an industrialized world power. At the time of Emperor Meiji's birth in 1852, Japan was a feudal, pre-industrial country dominated by the isolationist Tokugawa shogunate and the daimyō subject to it, who ruled over the country's 270 decentralized domains. Read more on Wikipedia

Emperor Meiji is most famous for the modernization of Japan.

Among politicians, Emperor Meiji ranks 210 out of 15,710. Before him are Henry VII of England, Catherine I of Russia, Rudolf Hess, Akbar, Charles X of France, and Napoleon II. After him are William the Silent, Empress Dowager Cixi, James VI and I, Scipio Africanus, Thutmose III, and Salvador Allende.