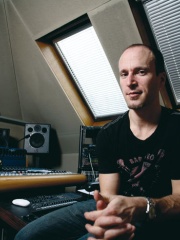 Murray Jonathan Gold (born 28 February 1969) is an English composer for stage, film, and television and a dramatist for both theatre and radio. He is best known as the musical director and composer of the music for Doctor Who from 2005, until he stepped down in 2018 after the tenth series aired in 2017. Read more on Wikipedia

Among composers, Murray Gold ranks 1,221 out of 1,228. Before him are Michel van der Aa, Osvaldo Golijov, Christopher Tin, Venetian Snares, Judith Weir, and Brett Dean. After him are Marcus Paus, Kailash Kher, Oneohtrix Point Never, Nicholas Britell, Pritam, and Yo Yo Honey Singh.