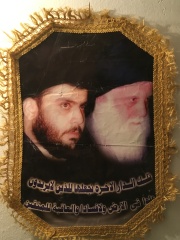 Muqtada al-Sadr (Arabic: مقتدى الصدر‎, romanized: Muqtadā ṣ-Ṣadr; born 4 August 1974) is an Iraqi Shia cleric, politician and militia leader. He is the leader of the Sadrist Movement and the leader of the Peace Companies, a Shia militia that is a reformation of the previous militia he led during the American military presence in Iraq, the Mahdi Army. Read more on Wikipedia

Since 2007, the English Wikipedia page of Muqtada al-Sadr has received more than 865,500 page views. His biography is available in 41 different languages on Wikipedia making him the 10,714th most popular politician.

Among politicians, Muqtada al-Sadr ranks 10,655 out of 14,801. Before him are Abigail Fillmore, Nicolau dos Reis Lobato, Thrasymedes, Roy Mata, Fulgencio Yegros, and Oswiu. After him are Fujiwara no Tadahira, Alfonso López Pumarejo, Dorothea of Denmark, Duchess of Prussia, Ronald Lauder, Banastre Tarleton, and Giulio Cesare Polerio.