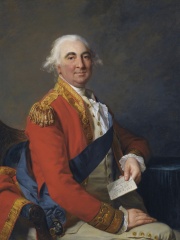 William Petty Fitzmaurice, 1st Marquess of Lansdowne, (2 May 1737 – 7 May 1805; known as The Earl of Shelburne between 1761 and 1784, by which title he is generally known to history), was an Irish-born British Whig statesman who was the first Home Secretary in 1782 and then Prime Minister in 1782–83 during the final months of the American War of Independence. He succeeded in securing peace with America and this feat remains his most notable legacy.Lord Shelburne was born in Dublin and spent his formative years in Ireland. After attending Oxford University he served in the British army during the Seven Years' War. As a reward for his conduct at the Battle of Kloster Kampen, Shelburne was appointed an aide-de-camp to George III. Read more on Wikipedia

Among politicians, William Petty, 2nd Earl of Shelburne ranks 8,917 out of 15,710. Before him are Princess Frederica Wilhelmina of Prussia, Adur Narseh, Hugo von Pohl, François de Charette, Glaucias of Taulantii, and Alan IV, Duke of Brittany. After him are Maria Dobroniega of Kiev, Patrick Henry, He Long, Domenico Selvo, Eleanor of Naples, Duchess of Ferrara, and Paolo Renier.