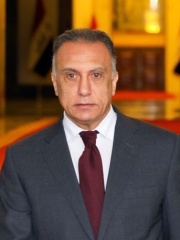 Mustafa Abdul Latif Mishatat (Arabic: مصطفى عبد اللطيف مشتت; born 5 July 1967), known as Mustafa al-Kadhimi, alternatively spelt Mustafa al-Kadhimy, is an Iraqi politician, lawyer and bureaucrat and former intelligence officer who served as the Prime Minister of Iraq from May 2020 to October 2022. He previously served as columnist for several news outlets and the Director of the Iraqi National Intelligence Service, originally appointed in June 2016. Read more on Wikipedia

Among politicians, Mustafa Al-Kadhimi ranks 10,123 out of 15,577. Before him are Rita of Armenia, Ferenc Nagy, Eadgifu of Wessex, Phraates I, Paul Vanden Boeynants, and Ebbe Schwartz. After him are Jules Wijdenbosch, Arseniy Yatsenyuk, Minjung of Goguryeo, Christoph Blocher, Peter II of Cyprus, and Estrid of the Obotrites.