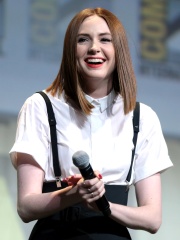 Karen Sheila Gillan (; born 28 November 1987) is a Scottish actress and filmmaker. She first began acting with guest roles on television, before receiving recognition for portraying Amy Pond, a primary companion to the Eleventh Doctor, in the BBC One series Doctor Who (2010–2013), for which she received critical acclaim, and she received several awards and nominations, including winning a National Television Award. Gillan's early film roles include the horror film Outcast (2010) and the romantic comedy film Not Another Happy Ending (2013). She relocated to the U.S. Read more on Wikipedia

Since 2007, the English Wikipedia page of Karen Gillan has received more than 14,527,650 page views. Her biography is available in 43 different languages on Wikipedia making her the 3,238th most popular actor.