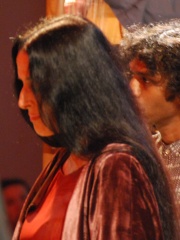 Montserrat Figueras i García (Catalan: [munsəˈrat fiˈɣeɾəs i ɣəɾˈsi.ə], 15 March 1942 – 23 November 2011) was a Spanish soprano who specialized in early music. Figueras was born 15 March 1942 in Barcelona, Spain. After initially training as an actress she began studying early singing techniques in 1966, together with her sister Pilar Figueras, and developed an approach and technique for singing early music which combined historical fidelity with vitality.In 1974 she and Jordi Savall, her husband since 1968, Lorenzo Alpert and Hopkinson Smith formed Hespèrion XX (Later: Hespèrion XXI), an early music ensemble. Read more on Wikipedia

Among singers, Montserrat Figueras ranks 540 out of 3,541. Before her are Kevin Federline, Grethe Ingmann, Rita Marley, Jeanette, LP, and Lola Novaković. After her are Jennifer Rush, Graham Bonnet, Patsy Cline, Elena Obraztsova, Zaz, and Rosemary Clooney.