This page contains a list of the greatest Spanish Singers. The pantheon dataset contains 3,541 Singers, 76 of which were born in Spain. This makes Spain the birth place of the 9th most number of Singers behind Japan and Sweden.

The following people are considered by Pantheon to be the top 10 most legendary Spanish Singers of all time. This list of famous Spanish Singers is sorted by HPI (Historical Popularity Index), a metric that aggregates information on a biography’s online popularity. Visit the rankings page to view the entire list of Spanish Singers. 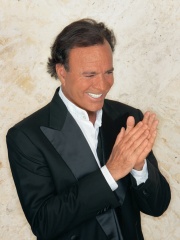 With an HPI of 80.59, Julio Iglesias is the most famous Spanish Singer.  His biography has been translated into 72 different languages on wikipedia.

Julio José Iglesias de la Cueva (Spanish: [ˈxuljo iˈɣlesjas]; born 23 September 1943) is a Spanish singer, songwriter and former professional footballer. Iglesias is recognized as the most commercially successful continental European singer in the world and one of the top record sellers in music history, having sold more than 100 million records worldwide in 14 languages. It is estimated that during his career he has performed in more than 5000 concerts, for over 60 million people in five continents. In April 2013, Iglesias was inducted into the Latin Songwriters Hall of Fame. In 1983, Iglesias was celebrated as having recorded songs in the most languages in the world, and in 2013 for being the artist in Latin music with the most records sold in history. In April 2013 in Beijing, he was honoured as the most popular international artist in China. In Brazil, France, Italy and elsewhere, Iglesias is the most successful foreign record seller, while in his home country, Spain, he has sold the most records in history, with 23 million records. During his career, Iglesias has won many awards in the music industry, including the Grammy, Latin Grammy, World Music Award, Billboard Music Award, American Music Award and Lo Nuestro Award. He has been awarded the Gold Medal for Merit in the Fine Arts of Spain and the Legion of Honour of France. UNICEF named him Special Ambassador for the Performing Arts in 1989. He has had a star on the Hollywood Walk of Fame since 1985. 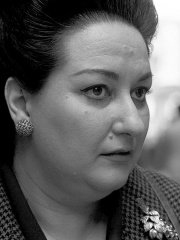 With an HPI of 80.52, Montserrat Caballé is the 2nd most famous Spanish Singer.  Her biography has been translated into 70 different languages.

María de Montserrat Bibiana Concepción Caballé i Folch (UK: , US: , Catalan: [munsəˈrat kəβəˈʎe j ˈfolk]; 12 April 1933 – 6 October 2018) was a Spanish operatic soprano. She sang a wide variety of roles, but is best known as an exponent of the works of Verdi and of the bel canto repertoire, notably the works of Rossini, Bellini, and Donizetti. She was noticed internationally when she stepped in for a performance of Donizetti's Lucrezia Borgia at Carnegie Hall in 1965, and then appeared at leading opera houses. Her voice was described as pure but powerful, with superb control of vocal shadings and exquisite pianissimo. Caballé became popular to non-classical music audiences in 1987, when she recorded, at the request of the International Olympic Committee, "Barcelona", a duet with Freddie Mercury, which became an official theme song for the 1992 Olympic Games. She received several international awards and also Grammy Awards for a number of her recordings. 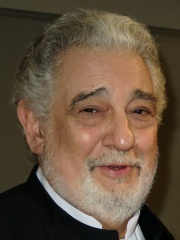 With an HPI of 80.00, Plácido Domingo is the 3rd most famous Spanish Singer.  His biography has been translated into 68 different languages.

José Plácido Domingo Embil (born 21 January 1941) is a Spanish opera singer, conductor and arts administrator. He has recorded over a hundred complete operas and is well known for his versatility, regularly performing in Italian, French, German, Spanish, English and Russian in the most prestigious opera houses in the world. Although primarily a lirico-spinto tenor for most of his career, especially popular for his Cavaradossi, Hoffmann, Don José and Canio, he quickly moved into more dramatic roles, becoming the most acclaimed Otello of his generation. In the early 2010s, he transitioned from the tenor repertory into almost exclusively baritone parts, most notably Simon Boccanegra. As of 2020, Domingo has performed 151 different roles.Domingo has also achieved significant success as a crossover artist, especially in the genres of Latin and popular music. In addition to winning fourteen Grammy and Latin Grammy Awards, several of his records have gone silver, gold, platinum and multi-platinum. His first pop album, Perhaps Love (1981), spread his fame beyond the opera world. The title song, performed as a duet with country and folk singer John Denver, has sold almost four million copies and helped lead to numerous television appearances for the tenor. He also starred in many cinematically released and televised opera movies, particularly under the direction of Franco Zeffirelli. In 1990, he began singing with fellow tenors Luciano Pavarotti and José Carreras as part of The Three Tenors. The first Three Tenors recording became the best-selling classical album of all time.Growing up working in his parents' zarzuela company in Mexico, Domingo has since regularly promoted this form of Spanish opera. He also increasingly conducts operas and concerts and was the general director of the Los Angeles Opera in California from 2017–2019. He was initially the artistic director and later general director of the Washington National Opera from 1996–2011. He has been involved in numerous humanitarian works, as well as efforts to help young opera singers, including starting and running the international singing competition, Operalia. Following accusations of sexual harassment since the late 1980s, Domingo resigned as general manager of the Los Angeles Opera in October 2019, and later apologised for causing hurt to several women who accused him. 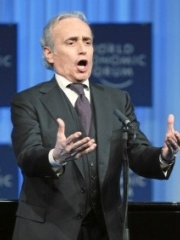 With an HPI of 75.18, José Carreras is the 4th most famous Spanish Singer.  His biography has been translated into 62 different languages.

Josep Maria Carreras Coll (Catalan: [ʒuˈzɛb məˈɾi.ə kəˈreɾəs ˈkɔʎ]; born 5 December 1946), better known as José Carreras (, Spanish: [xoˈse kaˈreɾas]), is a Spanish operatic tenor who is particularly known for his performances in the operas of Donizetti, Verdi and Puccini.Born in Barcelona, he made his debut on the operatic stage at 11 as Trujamán in Manuel de Falla's El retablo de Maese Pedro and went on to a career that encompassed over 60 roles, performed in the world's leading opera houses and in numerous recordings. He gained fame with a wider audience as one of the Three Tenors along with Plácido Domingo and Luciano Pavarotti in a series of mass concerts that began in 1990 and continued until 2003. Carreras is also known for his humanitarian work as the president of the José Carreras International Leukaemia Foundation (La Fundació Internacional Josep Carreras per a la Lluita contra la Leucèmia), which he established following his own recovery from the disease in 1988. 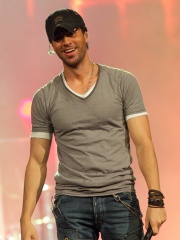 With an HPI of 73.63, Enrique Iglesias is the 5th most famous Spanish Singer.  His biography has been translated into 82 different languages.

Enrique Miguel Iglesias Preysler (Spanish pronunciation: [enˈrike miˈɣel iˈɣlesjas ˈpɾejzleɾ]; born 8 May 1975) is a Spanish singer, songwriter, record producer, philanthropist and actor. He started his recording career in the mid nineties on Mexican indie label Fonovisa and became the best selling Spanish language act of the decade. By the turn of the millennium he made a successful crossover into the mainstream English language market. He signed a multi-album deal with Universal Music Group for US$68 million with Universal Music Latino to release his Spanish albums and Interscope Records to release English albums. In 2010, Iglesias parted with Interscope Records and signed with another Universal Music Group label, Republic Records, to release bilingual albums. In 2015, he parted ways with Universal Music Group after being there for over a decade. He signed with Sony Music and his subsequent albums were to be released by Sony Music Latin in Spanish and RCA Records in English. Iglesias is one of the best-selling Latin music artists with estimated sales of over 70 million records worldwide. He has had five Billboard Hot 100 top five singles, including two number-ones. As of October 2020, Iglesias holds the number-one position on the Greatest of All-Latin Artists charts. Iglesias holds the record for the most number-one songs on the Billboard Hot Latin Songs chart with 27 songs, the Latin Airplay chart with 31 songs, and the Latin Pop Airplay chart with 24 songs. Iglesias also has 14 number-ones on Billboard's Dance charts, more than any other male artist. He has earned the honorific title King of Latin Pop. In December 2016, Billboard magazine named him the 14th most successful and top male dance club artist of all time. In October 2020, Iglesias was awarded the "Top Latin Artist of All Time" at the 2020 Billboard Latin Music Awards. 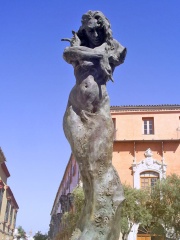 With an HPI of 71.66, Lola Flores is the 6th most famous Spanish Singer.  Her biography has been translated into 35 different languages.

María Dolores Flores Ruiz (21 January 1923 – 16 May 1995) was a Spanish singer, actress, dancer and businesswoman. Popularly known as (La Faraona) since the 1950s, Lola is known for her overwhelming personality onstage. As a bailaora, she enraged several generations of continents, although she distanced herself from flamenco canons. Lola performed more than 35 films, pigeonholed, in many of them, in Andalusian folklore, although she also interpreted rumbas and rancheras. Born and raised in Jerez de la Frontera, Lola moved to Seville in 1928. 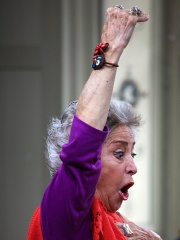 With an HPI of 68.53, Teresa Berganza is the 7th most famous Spanish Singer.  Her biography has been translated into 26 different languages.

Teresa Berganza Vargas OAXS (born on 16 March 1935) is a Spanish mezzo-soprano. She is most closely associated with the roles of Rossini, Mozart, and Bizet. She is admired for her technical virtuosity, musical intelligence, and beguiling stage presence. 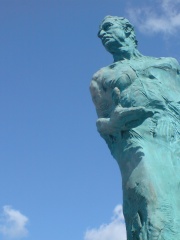 With an HPI of 67.29, Alfredo Kraus is the 8th most famous Spanish Singer.  His biography has been translated into 26 different languages.

Alfredo Kraus Trujillo (Spanish pronunciation: [alˈfɾeðo kɾaws tɾuˈxiʎo]; 24 November 1927 – 10 September 1999) was a distinguished Spanish tenor from the Canary islands (known professionally as Alfredo Kraus), particularly known for the artistry he brought to opera's bel canto roles. He was also considered an outstanding interpreter of the title role in Massenet's opera Werther, and especially of its famous aria, "Pourquoi me réveiller?" 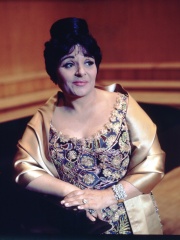 With an HPI of 67.28, Victoria de los Ángeles is the 9th most famous Spanish Singer.  Her biography has been translated into 27 different languages.

Victoria de los Ángeles (1 November 1923 – 15 January 2005) was a Spanish operatic lyric soprano and recitalist whose career began after the Second World War and reached its height in the years from the mid-1950s to the mid-1960s. 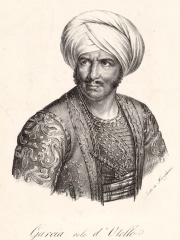 With an HPI of 66.09, Manuel García is the 10th most famous Spanish Singer.  His biography has been translated into 20 different languages.

Pantheon has 76 people classified as singers born between 1775 and 1999. Of these 76, 56 (73.68%) of them are still alive today. The most famous living singers include Julio Iglesias, Plácido Domingo, and José Carreras. The most famous deceased singers include Montserrat Caballé, Lola Flores, and Alfredo Kraus. As of October 2020, 9 new singers have been added to Pantheon including Isabella Colbran, Elvira de Hidalgo, and Miguel Fleta.

Which Singers were alive at the same time? This visualization shows the lifespans of the 19 most globally memorable Singers since 1700.