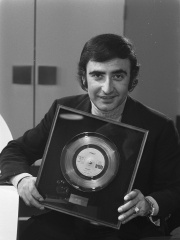 Pedro Pubill Calaf (Spanish: [ˈpeðɾo] Catalan: [puˈβiʎ kəˈlaf]; 24 March 1935 – 27 August 2014), better known as Peret, was a Spanish Romani singer, guitar player and composer of Catalan rumba from Mataró (Barcelona).Known for his 1971 single, "Borriquito" (Ariola Records), Peret represented Spain at the Eurovision Song Contest 1974 with the song "Canta y sé feliz" and performed during the closing ceremony at the 1992 Summer Olympics in Barcelona. In 2001, Peret recorded and released Rey De La Rumba (King of the Rumba) an album of updated versions of his older songs with guest musicians including Jarabe de Palo, El Gran Silencio, David Byrne of the Talking Heads, and more. In 1982 Peret withdrew from the music industry, joining the Iglesia Evangélica de Filadelfia, a large religious community of the Spanish Roma (gypsies) devoting himself in the following years exclusively to preaching and religious activities. Read more on Wikipedia

Since 2007, the English Wikipedia page of Peret has received more than 66,800 page views. His biography is available in 16 different languages on Wikipedia making him the 634th most popular singer.

Page views of Perets by language