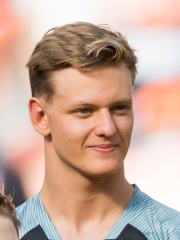 Mick Schumacher (German pronunciation: [ˈmɪk ˈʃuːmaxɐ]; born 22 March 1999) is a German racing driver, currently competing in the FIA Formula 2 Championship with Prema Theodore Racing and being affiliated to the Ferrari Driver Academy. He began his career in karting in 2008, progressing to the German ADAC Formula 4 by 2015. After winning the 2018 FIA F3 European Championship, Mick progressed to Formula 2 in 2019, where he won the sprint race at the Hungaroring. Read more on Wikipedia

Since 2007, the English Wikipedia page of Mick Schumacher has received more than 1,435,288 page views. His biography is available in 20 different languages on Wikipedia making him the 618th most popular racing driver.

Among RACING DRIVERS In Switzerland