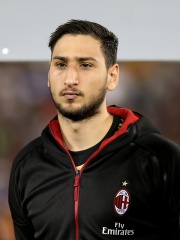 Gianluigi "Gigio" Donnarumma (Italian pronunciation: [dʒanluˈiːdʒi ˌdɔnnaˈrumma]; born 25 February 1999) is an Italian professional footballer who plays as a goalkeeper for Serie A club Milan and the Italy national team. He began his career with Milan in 2015, becoming the second-youngest goalkeeper ever to debut in Serie A, aged 16 years and 242 days; he immediately broke into the starting line-up, earning a reputation as one of the most promising young goalkeepers in the world. He also broke the record as the youngest Italy under-21 player ever to play, aged 17 years and 28 days in March 2016. Read more on Wikipedia

Since 2007, the English Wikipedia page of Gianluigi Donnarumma has received more than 3,326,041 page views. His biography is available in 43 different languages on Wikipedia making him the 2,412th most popular soccer player.