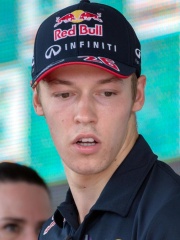 Daniil Vyacheslavovich Kvyat (Russian: Дании́л Вячесла́вович Квят, IPA: [dənʲɪˈil vʲɪtɕɪˈslavəvʲɪtɕ kvʲat], born 26 April 1994), is a Russian auto racing driver currently driving in Formula One for Scuderia AlphaTauri. He became the second Formula One driver from Russia and is the most successful of the three Russian drivers to date. He was runner-up at the 2012 Eurocup Formula Renault 2.0, and a champion in 2012 Formula Renault 2.0 Alps Series and 2013 GP3 Series. Read more on Wikipedia

Since 2007, the English Wikipedia page of Daniil Kvyat has received more than 1,118,412 page views. His biography is available in 41 different languages on Wikipedia making him the 392nd most popular racing driver.

Among RACING DRIVERS In Russia