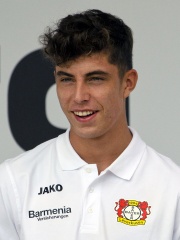 Kai Havertz (born 11 June 1999) is a German professional footballer who plays as an attacking midfielder or right winger for Bayer Leverkusen and the German national team. Upon making his debut for Leverkusen in 2016, Havertz became the club's then youngest-ever debutant in the Bundesliga, and he became their youngest-ever goalscorer when he scored his first goal the following year. Read more on Wikipedia

Since 2007, the English Wikipedia page of Kai Havertz has received more than 1,258,119 page views. His biography is available in 28 different languages on Wikipedia making him the 4,364th most popular soccer player.