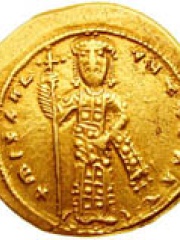 Michael VI Bringas (Greek: Μιχαήλ Βρίγγας), called Stratiotikos or Stratioticus ("the Military One", "the Warlike", or "the Bellicose") or Gerontas ("the Old"), reigned as Byzantine emperor from 1056 to 1057. Read more on Wikipedia

Michael V. Bringas is most famous for his work in the field of mathematics. He is a professor at the University of Illinois at Urbana-Champaign, and he has published many papers on mathematics.

Among politicians, Michael VI Bringas ranks 1,796 out of 15,710. Before him are Georgios Papadopoulos, Roh Tae-woo, Robert II of Scotland, Cleopatra III of Egypt, Amalric of Jerusalem, and Rastislav of Moravia. After him are Sirimavo Bandaranaike, Princess Sibylla of Saxe-Coburg and Gotha, Michael V Kalaphates, Yu the Great, Fanny Kaplan, and Sanakht.

Among people born in 1000, Michael VI Bringas ranks 8. Before him are Ubba, Pope John XV, Pope Gregory VI, Pope Sylvester III, Pope John XIV, and Parascheva of the Balkans. After him are Pope Damasus II, Antipope Boniface VII, Antipope John XVI, Saint Emeric of Hungary, Humbert of Silva Candida, and Ivan Vladislav of Bulgaria. Among people deceased in 1059, Michael VI Bringas ranks 2. Before him is Michael I Cerularius. After him are Bernard II, Duke of Saxony, Giselbert of Luxembourg, and Abdallah ibn Yasin.