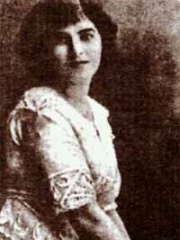 May Elias Ziadeh ( zee-AH-də; Arabic: مي إلياس زيادة, ALA-LC: Mayy Ilyās Ziyādah; 11 February 1886 – 17 October 1941) was a Lebanese-Palestinian poet, essayist, and translator, who wrote many different works both in Arabic and in French.After attending school in her native city Nazareth and in Lebanon, May Elias Ziadeh immigrated along with her family to Egypt in 1908, and started publishing her works in French (under the pen name Isis Copia) in 1911. Gibran Kahlil Gibran entered into a well-known correspondence with her in 1912. Being a prolific writer, she wrote for Arabic-language newspapers and periodicals, along with publishing poems and books. Read more on Wikipedia

Page views of May Ziades by language

Among writers, May Ziade ranks 2,722 out of 5,794. Before her are Ōtomo no Yakamochi, Caspar Barlaeus, Adam Zagajewski, Ernst Wiechert, William L. Shirer, and Petar Preradović. After her are Ibn Zaydún, Jon Fosse, Maksym Rylsky, Ford Madox Ford, Katherine Paterson, and Robert M. Pirsig.

Among WRITERS In Israel