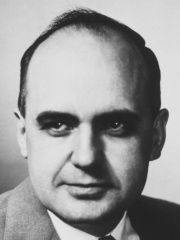 Maurice Ralph Hilleman (August 30, 1919 – April 11, 2005) was a leading American microbiologist who specialized in vaccinology and developed over 40 vaccines, an unparalleled record of productivity. According to one estimate, his vaccines save nearly 8 million lives each year. Many have described him as one of the most influential vaccinologists of all time.Of the 14 vaccines routinely recommended in current American vaccine schedules, Hilleman and his team developed eight: those for measles, mumps, hepatitis A, hepatitis B, chickenpox, Neisseria meningitidis, Streptococcus pneumoniae and Haemophilus influenzae bacteria. Read more on Wikipedia

Among politicians, Maurice Hilleman ranks 10,092 out of 15,710. Before him are Brihadratha Maurya, Eero Mäntyranta, Tarmashirin, Constantine III, King of Armenia, Mehmet Ali Talat, and Magdalena Sibylla of Saxe-Weissenfels. After him are Guilhermina Suggia, Raymond-Roupen, Puzur-Ashur I, Euphrosyne, Thomas E. Dewey, and Joseph de Villèle.