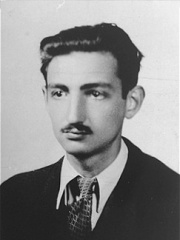 Marek Edelman (Yiddish: מאַרעק עדעלמאַן, born either 1919 in Homel or 1922 in Warsaw – October 2, 2009 in Warsaw, Poland) was a Polish political and social activist and cardiologist. Edelman was the last surviving leader of the Warsaw Ghetto Uprising and, long before his death, was the last one to stay in Poland despite harassment by the Communist authorities.Before World War II, he was a General Jewish Labour Bund activist. During the war he co-founded the Jewish Combat Organization (ŻOB). Read more on Wikipedia

Among politicians, Marek Edelman ranks 5,272 out of 15,577. Before him are Ghiyas ud din Balban, Huo Guang, Ahmose-Meritamun, Ferenc Deák, Nobuyuki Abe, and Mihrişah Sultan. After him are Anna Lindh, Suzanne, Duchess of Bourbon, Giovanni Gronchi, Marino Faliero, Taksony of Hungary, and Hwang Jang-yop.