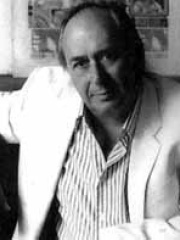 James Graham Ballard (15 November 1930 – 19 April 2009) was an English novelist, short story writer, satirist, and essayist known for provocative works of fiction which explored the relations between human psychology, technology, sex, and mass media. He first became associated with the New Wave of science fiction for post-apocalyptic novels such as The Drowned World (1962), but later courted controversy for works such as the experimental short story collection The Atrocity Exhibition (1970), which included the 1968 story "Why I Want to Fuck Ronald Reagan", and the novel Crash (1973), a story about a renegade group of car crash fetishists. In 1984, Ballard won broader recognition for his war novel Empire of the Sun, a semi-autobiographical account of a young British boy's experiences in Shanghai during Japanese occupation; the story was adapted into a 1987 film directed by Steven Spielberg. Read more on Wikipedia