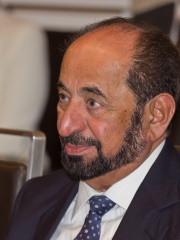 H.H. Sultan bin Muhammad Al-Qasimi, commonly known as Sheikh Sultan III (Arabic: سلطان بن محمد القاسمي‎; born 2 July 1939), is the sovereign ruler of the Emirate of Sharjah and is a member of the Federal Supreme Council of the United Arab Emirates. He has ruled Sharjah continuously since January 1972, apart from a six-day period in June 1987, during an attempted coup led by his brother Sheikh Abdulaziz bin Mohammed Al-Qasimi. Read more on Wikipedia

Since 2007, the English Wikipedia page of Sultan bin Muhammad Al-Qasimi has received more than 523,472 page views. His biography is available in 17 different languages on Wikipedia making him the 5,569th most popular politician.

Others born in United Arab Emirates