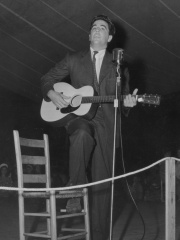 Alan Lomax (; January 31, 1915 – July 19, 2002) was an American ethnomusicologist, best known for his numerous field recordings of folk music of the 20th century. He was also a musician himself, as well as a folklorist, archivist, writer, scholar, political activist, oral historian, and film-maker. Lomax produced recordings, concerts, and radio shows in the US and in England, which played an important role in preserving folk music traditions in both countries, and helped start both the American and British folk revivals of the 1940s, 1950s and early 1960s. He collected material first with his father, folklorist and collector John A. Read more on Wikipedia

Among businesspeople, Alan Lomax ranks 332 out of 604. Before him are Lei Jun, Marc Rich, Andrea Agnelli, Isabella Beeton, Linda McMahon, and Jean-Baptiste Vuillaume. After him are Maurice Farman, Charles Yerkes, Chuck Feeney, Jerry Buss, Jean-Michel Aulas, and Will Keith Kellogg.