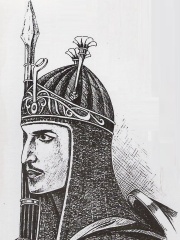 Shāh Mahmūd Hotak, (Pashto/Dari: شاه محمود هوتک), also known as Shāh Mahmūd Ghiljī (شاه محمود غلجي) (lived 1697 – April 22, 1725), was an Afghan ruler of the Hotak dynasty who overthrew the heavily declined Safavid dynasty to briefly become the king of Persia from 1722 until his death in 1725. He was the eldest son of Mirwais Hotak, the chief of the Ghilji Pashtun tribe of Afghanistan and Pakistan, who had made the Kandahar region independent from Persian rule in 1709. Read more on Wikipedia

Among politicians, Mahmud Hotak ranks 5,846 out of 15,710. Before him are Diego, Prince of Asturias, Ōyama Iwao, Tokugawa Ietsuna, Hantili I, Janusz Radziwiłł, and Mirjana Marković. After him are Kiichi Miyazawa, Jovinus, Étienne François, duc de Choiseul, Tự Đức, Prince Felix of Schwarzenberg, and Edmund of Langley, 1st Duke of York.