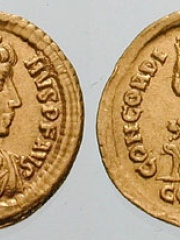 Magnus Maximus (Latin: [ˈmaŋnus ˈmaksimus]; Welsh: Macsen Wledig [ˈmaksɛn ˈwlɛdɪɡ]; c. 335–28 August 388) was Roman emperor in the western portion of the Empire from 383 to 388. He usurped the throne from emperor Gratian in 383 through negotiation with emperor Theodosius I. He was made emperor in Britannia and Gaul the next year while Gratian's brother Valentinian II retained Italy, Pannonia, Hispania, and Africa. In 387, Maximus's ambitions led him to invade Italy, resulting in his defeat by Theodosius I at the Battle of Poetovio in 388. Read more on Wikipedia

Magnus maximus is the largest muscle in the human body. It is located on the back of the thigh and is responsible for straightening the knee.

Among politicians, Magnus Maximus ranks 797 out of 15,710. Before him are John III of Sweden, Jovian, John I Tzimiskes, Jeroboam, Ælla of Northumbria, and Cato the Younger. After him are John of Bohemia, Fahd of Saudi Arabia, Dick Cheney, Ivan VI of Russia, Nur ad-Din, and Gordian III.