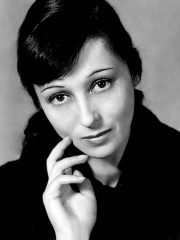 Luise Rainer (, German: [ˈʁaɪ̯nɐ]; 12 January 1910 – 30 December 2014) was a German-American-British film actress. She was the first thespian to win multiple Academy Awards and the first to win back-to-back; at the time of her death, thirteen days shy of her 105th birthday, she was the longest-lived Oscar recipient, a superlative that had not been exceeded as of 2020.Rainer started her acting career in Germany at age 16, under the tutelage of Austria's leading stage director, Max Reinhardt. Within a few years, she had become a distinguished Berlin stage actress with Reinhardt's Vienna theater ensemble. Read more on Wikipedia

Since 2007, the English Wikipedia page of Luise Rainer has received more than 763,511 page views. Her biography is available in 53 different languages on Wikipedia making her the 416th most popular actor.