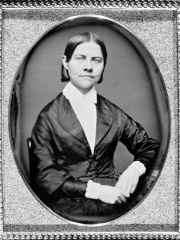 Lucy Stone (August 13, 1818 – October 18, 1893) was a prominent U.S. orator, abolitionist, and suffragist, and a vocal advocate and organizer promoting rights for women. In 1847, Stone became the first woman from Massachusetts to earn a college degree. She spoke out for women's rights and against slavery at a time when women were discouraged and prevented from public speaking. Read more on Wikipedia

Since 2007, the English Wikipedia page of Lucy Stone has received more than 462,584 page views. Her biography is available in 19 different languages on Wikipedia making her the 343rd most popular social activist.