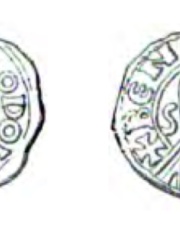 Louis the Blind (c. 880 – 5 June 928) was the king of Provence from 11 January 887, King of Italy from 12 October 900, and briefly Holy Roman Emperor, as Louis III, between 901 and 905. He was the son of Boso, the usurper king of Provence, and Ermengard, a daughter of the Emperor Louis II. Through his father, he was a Bosonid, but through his mother, a Carolingian. Read more on Wikipedia

Since 2007, the English Wikipedia page of Louis the Blind has received more than 138,372 page views. His biography is available in 36 different languages on Wikipedia making him the 2,118th most popular politician.

Page views of Louis the Blinds by language

Among politicians, Louis the Blind ranks 2,103 out of 14,801. Before him are Sweyn II of Denmark, Krum, Ambrogio Spinola, 1st Marquess of Balbases, Ferdinand Karl, Archduke of Austria-Este, Benazir Bhutto, and Emperor Ruizong of Tang. After him are Willi Stoph, Ladislaus II of Hungary, Jean Sylvain Bailly, Al-Mutawakkil, Wenceslaus I of Bohemia, and Ziying.