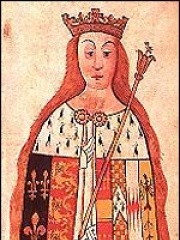 Anne Neville (11 June 1456 – 16 March 1485) was an English queen, the younger of the two daughters and co-heiresses of Richard Neville, 16th Earl of Warwick (the "Kingmaker"). She became Princess of Wales as the wife of Edward of Westminster (only son and heir apparent of King Henry VI) and then Queen of England as the wife of King Richard III. As a member of the powerful House of Neville, she played a critical part in the Wars of the Roses fought between the House of York and House of Lancaster for the English crown. Her father Warwick betrothed her as a girl to Edward, Prince of Wales, the son of Henry VI. The marriage was to seal an alliance to the House of Lancaster and halt the civil war between the two houses of Lancaster and York.After the death of Prince Edward, she married Richard, Duke of Gloucester, younger brother of King Edward IV and of George, Duke of Clarence, the husband of Anne's elder sister Isabel Neville. Read more on Wikipedia

Anne Neville was the youngest daughter of Richard Neville, Earl of Warwick, and his wife, Anne Beauchamp. She was married to King Richard III of England in 1472.

Among politicians, Anne Neville ranks 1,410 out of 15,710. Before her are Alexios IV Angelos, Imad ad-Din Zengi, Alexander Farnese, Duke of Parma, Friedrich Ratzel, Mary of Guise, and Theodoric I. After her are Jehoiakim, William II of England, Peter of Castile, Gyula Andrássy, Chlodio, and Sulayman ibn Abd al-Malik.