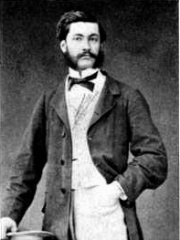 Louis Aimé Augustin Le Prince (28 August 1841 – disappeared 16 September 1890, declared dead 16 September 1897) was a French artist and the inventor of an early motion-picture camera, possibly the first person to shoot a moving picture sequence using a single lens camera and a strip of (paper) film. He has been credited as "Father of Cinematography", but his work did not influence the commercial development of cinema—owing at least in part to the great secrecy surrounding it.A Frenchman who also worked in the United Kingdom and the United States, Le Prince's motion-picture experiments culminated in 1888 in Leeds, England. In October of that year, he filmed moving-picture sequences of family members in Roundhay Garden and his son playing the accordion, using his single-lens camera and Eastman's paper negative film. Read more on Wikipedia

Among INVENTORS In France